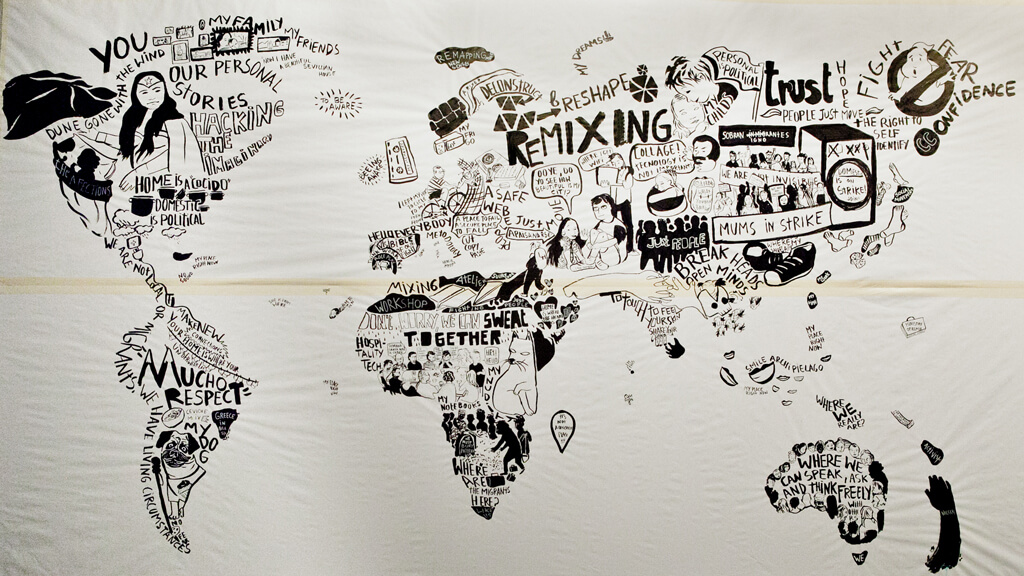 Remapping Europe investigates images of migration in Europe and the relationship between the public sphere and how migrants are represented in the media. Based on this idea, a series of activities were developed around a common principle: remixing media as a form of re-examining these images. The following works were produced under this premise: a series of workshops, two live cinemas, a publication and one edition of the ZEMOS98 Festival on this theme.

Doc Next Network, coordinated by the European Cultural Foundation, of which ZEMOS98 is a part, has been in charge of developing different activities with Remapping Europe as the focus. A series of workshops were produced with migrant individuals from Turkey, Poland, the UK and Spain, which resulted in almost fifty short films featuring first person narratives, using the tools and language of audiovisual remixing. European Souvenirs and €urovisions are two live cinema shows; the first uses the metaphor of tourist souvenirs to reflect on memory and travel as relates to migration, and the second deals with the experience of migration using the voices of those who have migrated themselves. Remixing Europe is a book that compiles articles from authorities on the subject, looking for the reasons why representations of migration in Europe are so limited. Finally, the sixteenth ZEMOS98 festival was dedicated to Remapping Europe; a group of international agents from different disciplines met for several days and all activities were focused on the representation of migrants in the media.

Our search for other formats and narratives is a response to the need to imagine other possible realities beyond the margins of the stories promoted by the media. Remapping Europe has been a place for formal experimentation, using remixing as an indispensable tool for investigating other languages for a more inclusive European public sphere. Additionally, Remapping Europe has been a very interdisciplinary project in which people with very diverse origins, geographic backgrounds and professions have come together to debate about the coordinates of our proposals.