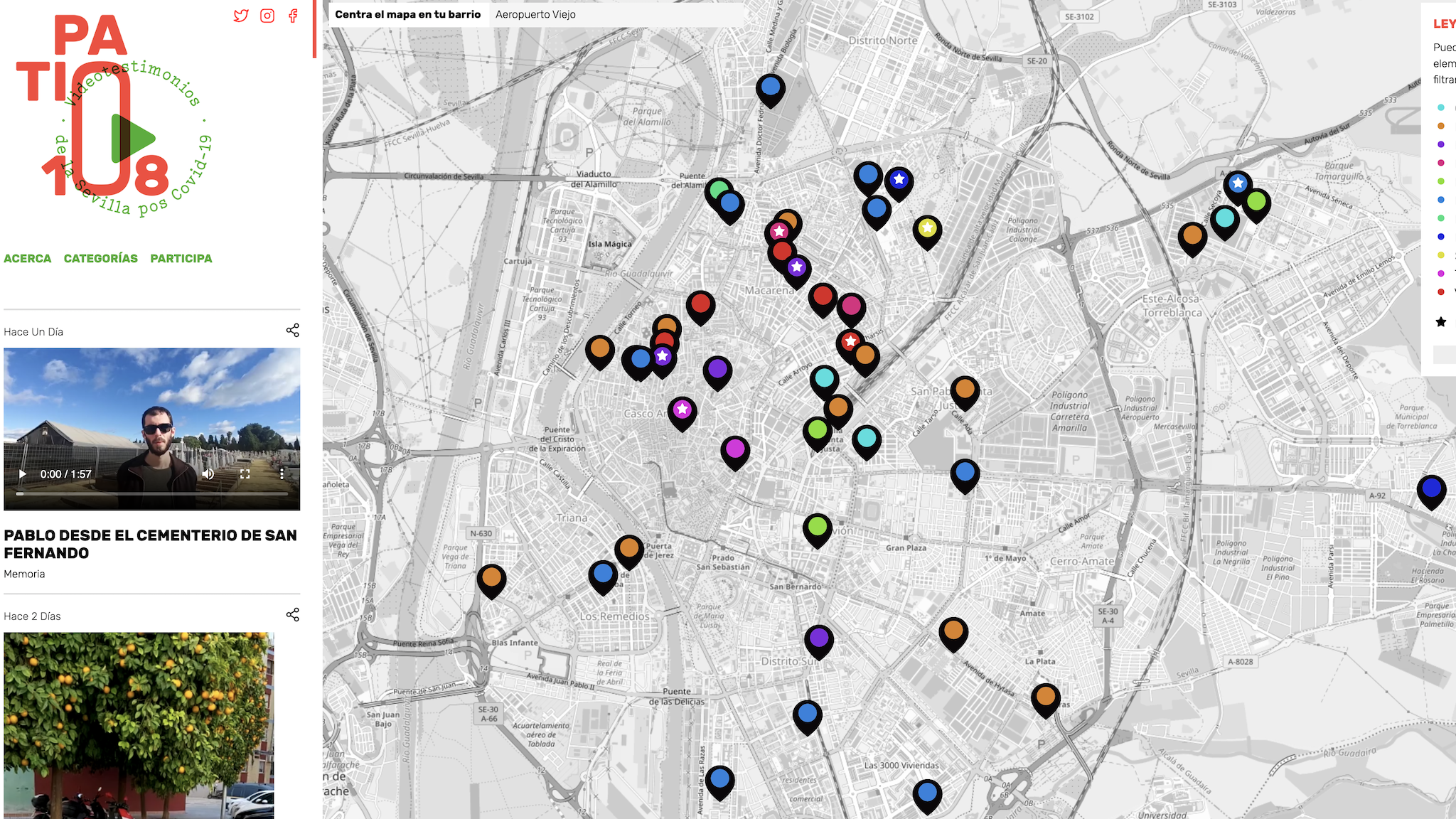 Patio 108. Vídeo-testimonies of the Post-Covid19 Seville

Patio 108 is an invitation to occupy the narratives of Seville. An invitation to drain the city from its stereotypes, to centrifuge it to its peripheries, to fill it with diversity, neighborhoods, reality. Citizens can share stories, complaints, memories and experiences that are usually forgotten by the government and local media. Patio 108 is an open and collaborative platform in which any inhabitant can send a video-testimony. Each testimony adds to a map composing a mosaic or still picture of the city of Seville right after the pandemic.

Patio 108 questions us about the model of city we want to live in through twelve different categories: housing, childhood, diversity, tourism, public space, security, culture, mobility, work, memory, feminisms and climate. The platform is a tool to reclaim the right to the city when social distance is the law; but it also acknowledges that most of the problems that arouse are rooted in the city. The health crisis stressed their importance, more than creating them.

The centralism of the cultural activities in the city; the carelessness about trees and gardens of the city; the design of public space that doesn’t meet the diverse needs of citizenship; the oblivion about children, parks have been closed for seven months now; the historical memories of those punished by the dictatorship; the importance of car for the mobility in the city.

Seville, differently from many other similar cities, lacks effective mechanisms to listen to its citizens. Experiments with participation have usually been basically make-up, developed just to legitimate projects and proposals already agreed upon. Experiences that, far from redistributing decision making tools, have been used to concentrate power in a few hands. Patio 108, through testimonies, shows the need of involving citizenship in a real two-sided dialogue. And it does so by reclaiming a redistribution of the narratives of the city from its centre to its peripheries, where most of the population actually lives.

Patio 108 is a platform developed in the frame of the Spanish activities of MediActivism, coordinated by ZEMOS98. The platform is licensed under free software, so you can use the code to create your own platform every time you credit the original authors. The platform has been developed by members of the Jartura Collective: Ana Álvarez, Santiago Martínez-Pais, Bernar Sañudo Franquelo and Kike Suárez; by members of ZEMOS98: Clara García and Lucas Tello; and by Samuel Fernández Neftalí.

Some of its contents will be translated in the coming months, please stay tuned to the MediActivism social networks! If you have any doubt or proposal, please get in touch with the team at contacto@patio108.es.