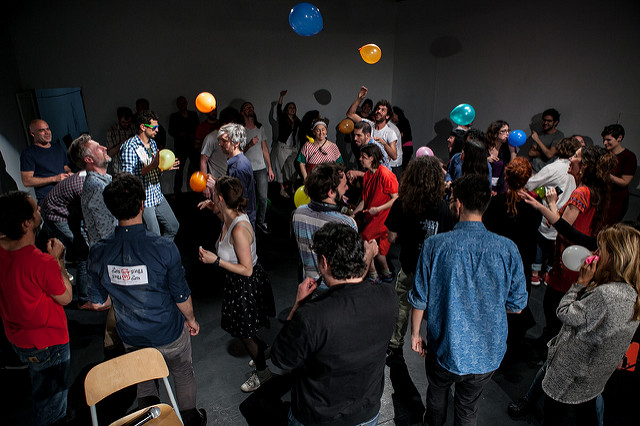 It has already been several years since the balances that held together the lives of ordinary people were shattered. Beneath the shelter of economic welfare, the growing germ of illnesses silently spreading since the 80s was discovered in nearly every social body. The 2008 crack caught us with nothing but the clothes on our backs and a bad flu: with communities who were given the task of supporting personal care services we could no longer afford to hire, with an environmental scenario suggesting collapse, without trade unions to ensure at least some resistance against massive destruction Lay-off proceedings or labour adjustment plans. Without a collective ‘we’ subject.

In order to bring back some consistency to life, people put together spaces in which such emptiness was at least more bearable. A common culture started to bud from this practice of meeting with others, one which enhanced the spectrum of what is possible and celebrated contagion and replicability following the wake of digital culture. The internet brought about the immaterial dimension of the revolution which was catching on and amplified its signal until the low notes made our societies’ fundamental values tremble.

Parting from the most diverse practices, sharing source codes started being considered as a natural procedure, the romantic concept of authorship was replaced by tons of collective intelligence, and a sustained effort was made to democratize conditions for the access to creation and life management tools. In short, there was a complex process of politicization of spaces that economy had managed to keep in separate cells for decades. And today, the idea of the end of politics as a professional speciality and the claim that citizens must have an active role in decision making are already appearing in the mediascape.

A new hesitant but inevitable political culture was born between fractures and breakups, a product of the cultural merge that had been happening in different places, configuring a social map full of creative intersections that led to a new order of knowledge and of the practices to constitute our identities in common. From these steams, new political parties were cooked with a will to ‘democratize our democracies’, to open up official institutions in order to let fresh air in, to institute new political practices and create mechanisms to improve the ways for citizen involvement.

But at the same time that gestures were conceived and rehearsed for new emancipatory approaches in institutions at local, regional and national levels, a great part of European citizenry started to show their support to far right-wing leaders; while the decision to expel refugees to Europe’s back yard was made, and the Troika jeopardized the future of several generations in countries caught in dependant situations. The atrocities committed in the name of citizenry announced the need to identify ourselves with new measures.

The commons started to be conceived back then as a container able to harbour a European-scale collective narration. An account capable of structuring the transversality of such claims parting from the creation of intangible knowledge and material resources that can make our lives more liveable. The commons have become the unavoidable reference to conceive, design and execute plans in which we can experience together this new ‘political culture’ that implies not thinking of citizenry as a meek subject, but as a multiple and complex one, capable of bearing initiative, self-management and autonomy.

Against institutional inertia, against exhausted bodies, against dependence on the public sector and the private sector’s interests, such commons are plotted having yet to sort paths full of threats. How to avoid the drainage of sense from the symbolic power of the commons? How to prevent the European governments from turning the commons into the excuse to dump public services? How should we do for the commons to be indentified as a synonym for decent survival conditions for art, culture or medical professionals, and ultimately for citizenry as a whole? It is urgent to share concrete and situated experiences that can work as an inspiration and inaugurate possible conditions for a narration of the commons capable of confronting a (nearly) omnipotent leviathan.

Culture, the City and the Commons encounter will offer space and time  to share this experiences from differentes agents who are working in the fields of culture and political art, right to the city, participatory processes and commons. You can consult the whole program here.