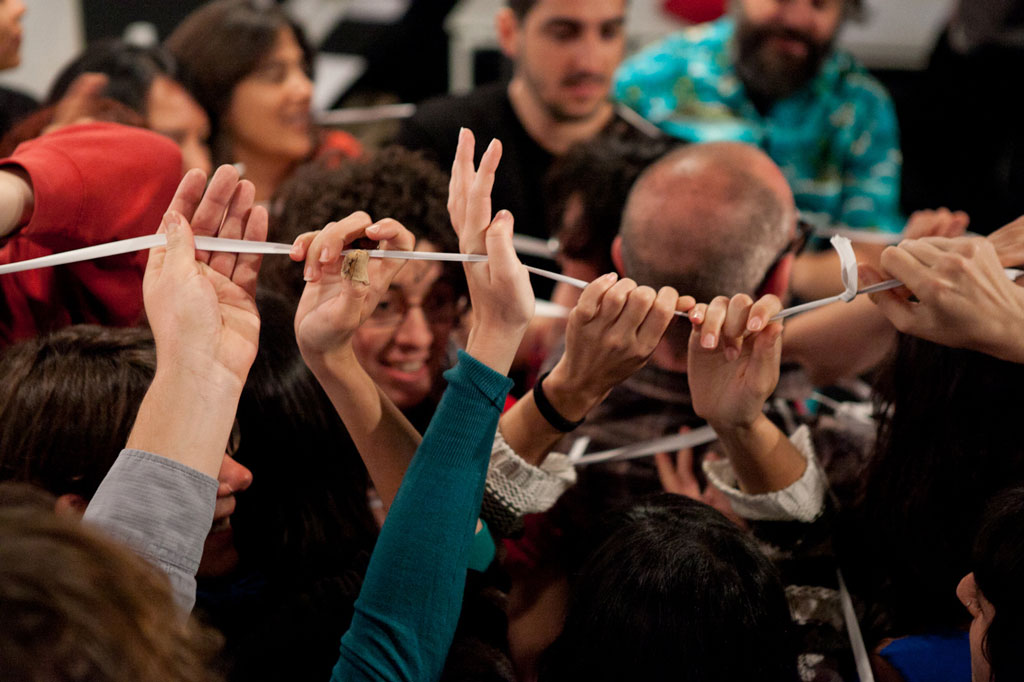 The Importance of Care and Affections in our Communities: Copylove and the Invisible Commons

Copylove started in 2011 as a local informal network for investigations into commons and feminist practices. Later, it turned into a public and open investigation via www.copylove.cc (only in Spanish) led by Sofía Coca (ZEMOS98, Sevilla), Txelu Balboa (COLABORABORA, Euskadi) and Rubén Martínez (Fundación de los Comunes, Barcelona) in which we tried to extract, from the experiences we had, what kind of ties and relations are established within a community of agents, whose practices and ways of doing generate commons for the whole community. Copylove was a way of getting deeper into all that we consider that reproduces desirable conditions of existence: affection, processes of interdependence, mutual aid, community love, care, etc. When we say Copylove, we mean everything we produce and reproduce that can take us closer to “good living”, to a sustainable living, and not simply in monetary terms. 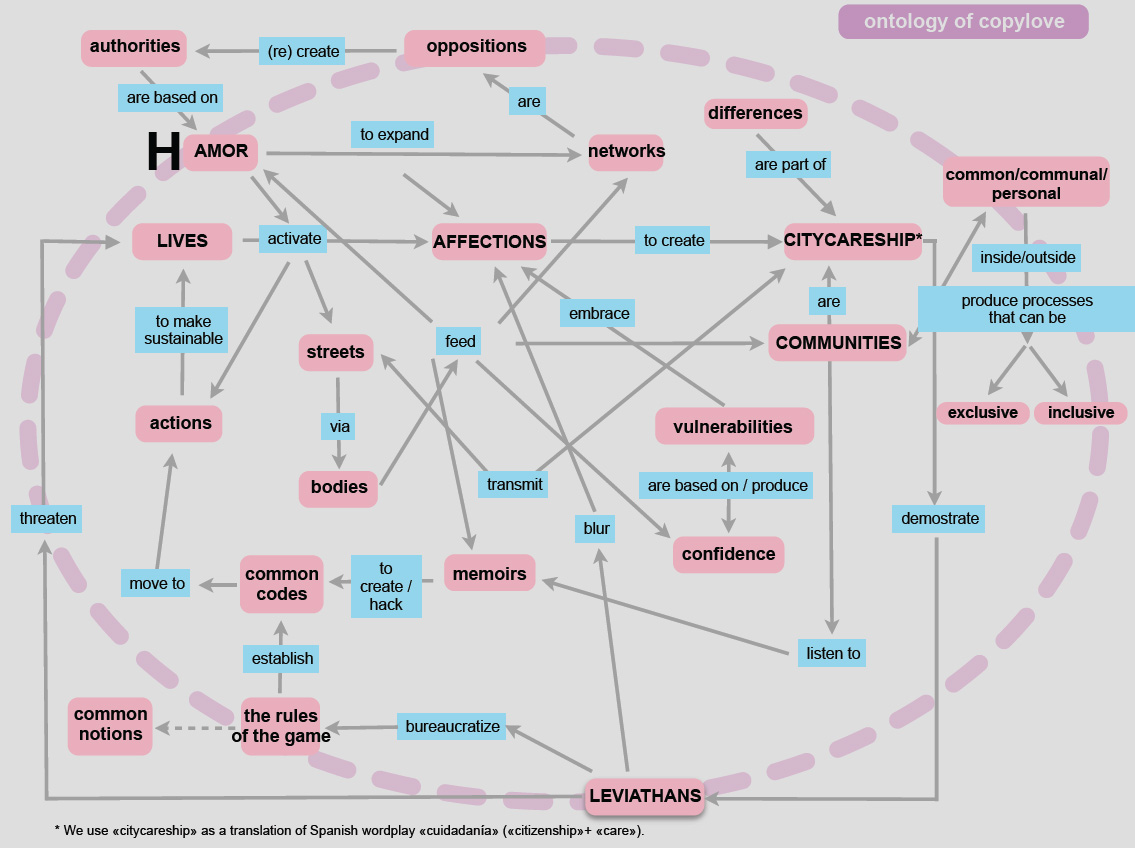 The ontology of Copylove. Map collectively produced after the first Copylove Residencies. Translated by Rubén Díaz.

The story-behind: Commons, Love and Remix

About four years ago, Copylove put into orbit the ZEMOS98 festival, bringing an apparently simple premise: investigating how affection and care can cultivate relationships within a community of agents who are trying to generate common goods. Taking this hypothesis as a starting point, the coordination group called some residencies in February, March and April 2012; and there, people belonging to several groups with previous community experience could have a brainstormed ways of thinking related to the management of affections, commons and communities.

We believe in commons. Commons, as Elionor Ostrom said, are sometimes apart from the market or the government. Commons are about the contents we are sharing all the time in our digital networks. But commons are not new. When we talk about commons, we are talking about really old questions. For example, the recipe of our typical andalusian tomato soup is a common recipe. It is not private. It is not exactly public (in the sense of “institutional or governed by official rules). It constructs a common code. A common language. You can choose one single recipe and create your own version. But, if you share your own version, anyone could do it the same, remixing your version. Because, culture is an infinite palimpsest. So, of course, we have to expand the utility of the commons. We have to spread how the commons could help us to build our communities.

On other hand, when we talk about the market and the government, we talk about words like “inside” or “outside” the communities, and about our official economic system. And we divide it in two levels: the productive level and the reproductive. Some feminist studies consider that we are just talking about the official and productive level. When you ask someone, “What do you do?”, people answer with the professional profile. They don’t say: “I’m a mother” or “I usually cook rice with vegetables”. But, how important are these kind of tasks in our communities? Why can’t  we talk about it? We consider this a reproductive sphere. And you can imagine how important it is for our culture. 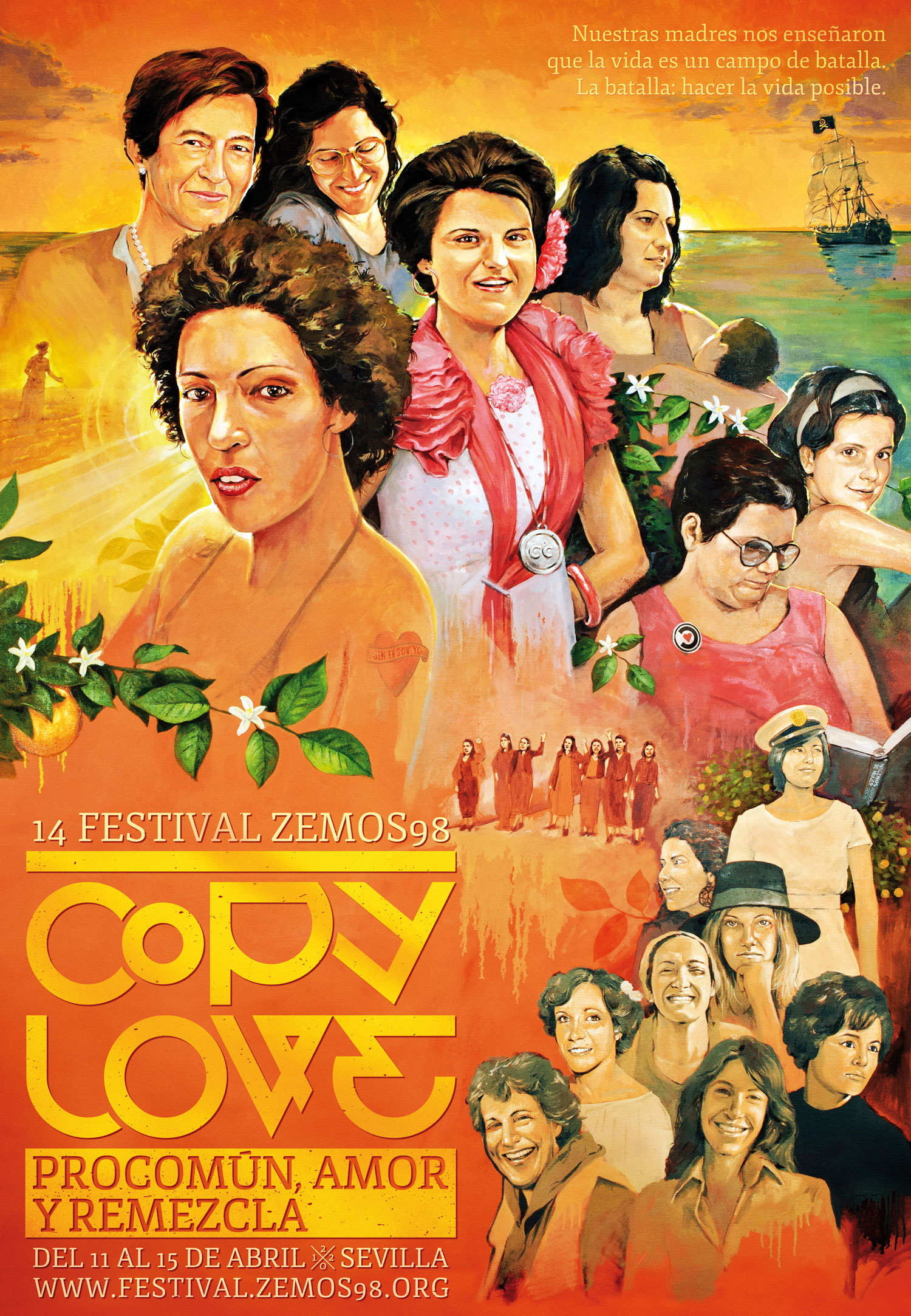 “Our mothers teached us that life is a battlefield. The battlefield of making possible what we consider life”. Poster of the 14 ZEMOS98 Festival, dedicated to our mothers.

Commons, love and remix were the three initial concepts, they related to each other, they opened the field of play to start building collectively the meaning of “copylove”. We saw soon that they were three interwoven fields nourishing each other: Affections nourish commons and vice versa. We must place affection in the spotlight, understand commons as already a part of a community, see that communities have constituent links and values; but also, in order for them to be sustainable, require a caring component, a subjective built by affections.

No doubt that the objective of the first edition of Copylove was to make all those ways of doing things visible, and create a community where citizens are the core of it. Trying to become more specific about it, we wanted to recall those everyday practices so tightly attached to our everyday life that go unnoticed, because they are essential to hold our lives together. We defined the invisible commons, as non-monetary resources, ways of doing things to which we have become assimilated (for good or for bad), and processes we have been taught or acquired in our community life and that make community sustainable. These commons are occasionally invisible because we have assumed they are something “natural” in our practice, but other times (most of the times and especially those related to women’s labour work) they become invisible by the developmentalist regime we are living in, specialized in ignoring that what makes life livable. 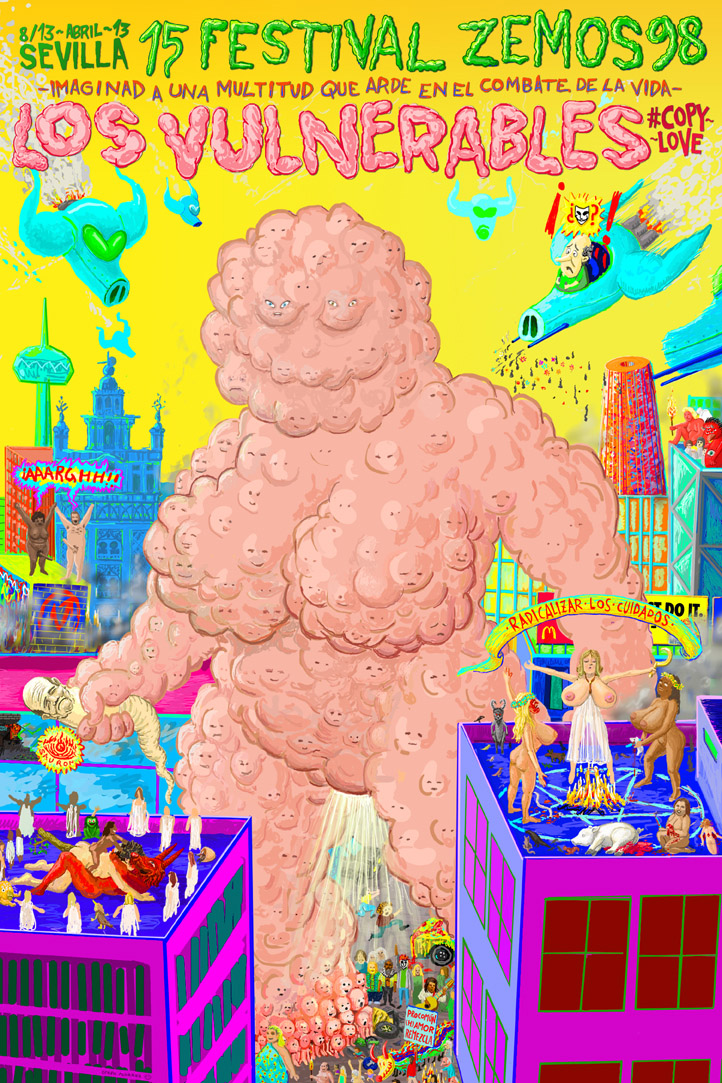 Based on this legacy, we reached a new turning point in the investigation. We had to organise what we had learned and pose new questions. Following this track, we thought that “invisible commons” was a good label for the things we had learned up to that moment, and gave us the opportunity to keep uncovering those practices exceeding what is considered productive. In order to have a better understanding of all the resources and community processes we had to value and activate simultaneously, we started interviewing groups and associations from Bilbao and Barcelona, so we could obtain new questions for our Copylove residency.

We were searching for a better understanding of these invisible commons, starting from three topics that were present in the early stages of the investigation, they would help us to go deeper towards the following stage. Three major concepts would be helpful and would make new questions about “copylove” arise: Community, Memory and Life explained by the participants in this video (english subtitles):

After that, we did another Festival dedicated to Copylove in April 2013 and a crowdfunding campaign (gathering 7.865€, at the end of that year añlso) to try to gather all the essential lessons-learned in the process and of course, we had internalized most of them also in our daily practices and as part of our way of living and working.

In summary: without care, life is impossible. Life cannot be “productive” without a care centered economy. If we have been “productive” in the fiction called capitalism, it is thanks to the fact that we care for others, what some have labelled as an “unproductive” action: domestic work, the reproduction of labor. Without care, working life could not exist in a market economy, although these practices are not visible. This invisible work has been done by women (and here «women» can be also understood as minorities). Neither state nor market have managed to cover a fundamental need: the right to be cared for/of.